Shoe fetishism is the attribution of attractive sexual qualities to shoes or other footwear as a matter of sexual preference, psychosexual disorder, and an alternative or complement to a relationship with a partner. It has also been known as retifism, after Nicolas-Edme Rétif (October 23, 1734–February 2, 1806), called Rétif de la Bretonne, a French novelist.

Individuals with shoe fetishism can be erotically interested in either men’s or women’s shoes. Although shoes may appear to carry sexual connotations in mainstream culture (for example, women’s shoes are commonly sold as being “sexy”) this opinion refers to an ethnographic or cultural context, and is likely not intended to be taken literally. Feet and pantyhose are related fetishes which are common among shoe fetishists, but this is not always the case.

In the 19th century, Central European students drank wine or champagne from their lady’s shoe or bootlet as a sign of devotion. The custom is featured in the 1882 opera Der Bettelstudent, where Symon drinks champagne from Laura’s shoe at their wedding. In commemoration of this romantic tradition, the French shoe manufacturer Louboutin issued in 2009 a glass shaped like a woman’s shoe, which was negatively reviewed newspaper by Die Welt. 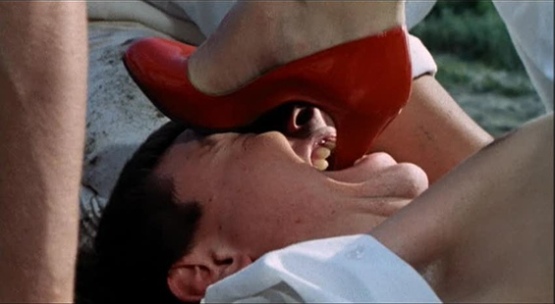 Imelda Marcos, the wife of Philippine dictator Ferdinand Marcos, became a symbol of the extravagance of her husband’s political reign (1965-1986), and most notoriously her collection of 2,700 pairs of shoes

In Lady Gaga’s music video “Paparazzi (Explicit)” by Johnas Akerlund there is a scene in which a man is licking the singer’s black high heeled pump.